Everything Has A Beginning: The Ricardo Mena Story A quarter of a century by some is considered a generation, and it is then a generation ago that University Sports Program (USP) began helping its first student-athlete, to nowadays becoming one of the most respected and well-known college recruiting agencies in the world.

This first student-athlete was as much a trailblazer as he was peculiar. How many 24 years-old freshmen have you heard of that are one of the best 300 tennis players in the world? This was the case of Ricardo Mena, the first USP client ever.

Ricardo had an illustrious career at Flagler College. A three-time NAIA All-American and National Champion. This past December, Ricardo was back at USP, this time as a coach, with players to participate in the 15th USP Winter Showcase in Naples. We took the time to ask him some questions and share his experience in the past 25 years.

USP: Tell me a little bit about how did you come into Tennis? Did you practice any other sport?

Ricardo Mena: I started practicing tennis because of my siblings. I liked it from the start. As the years passed, I liked it even more. The issue with me was, that I started playing tennis late, and this meant that I had a lot of catch up to do. Nevertheless, with hard work and dedication, I was able to become one of the best players in Paraguay.

USP: Deciding between being professional or going to college tends to be a big decision for a 20-year-old. Was this the case with you or did you have it clear?

RM: In my case, it was not in my twenties, I made the decision when I was 25 years old. I found myself in a debate since I was playing with a top 300 ranking but felt stuck and I always wanted to study in the US. It was a hard decision to make, but looking back at it, it was the correct one.

USP: It was not common for someone with your ranking and age to go to College in South America. What did your friends think of this decision?

RM: Exactly, it was not very common. In fact, I believe I was the first Paraguayan to go to college as a tennis player with a full ride. My parents were very happy, as they had lived in the States and thought it was great for me.

USP: How did you find USP?

RM: I heard from someone from my Tennis Federation that they had received a fax from a company that was helping students athletes and I contacted them. I got in touch with Thomas Anderson (USP founder and current CEO) and my future became clearer.

USP: At that time, did you know you were the first client USP had?

RM: At that time I did not know that, but two decades later I met Thomas and he mentioned it to me.  Nowadays, seeing everything that USP represents, how much it has grown, and how many lives it has changed, I feel proud of having to be the first client.

USP: How was your recruiting process? Did you find any challenges?

RM: It was a slow process since I did not speak much English and since I had played in the pro tour, I had to go through a longer road than others but once everything was solved it was easy.

USP: Tell us a bit about your college experience?

RM: These were the best years of my life. Playing tennis was my passion and combining it with studying seemed fantastic. I met lots of friends, traveled and learned a lot. Coming from pro tournaments, I was above most of the players. In addition, I was not eligible to go to Division 1 and had to play in the NAIA, where I was National Champion twice. I learned how to play more doubles, and being a teammate. Truthfully, it was an experience I recommend to my students and children. 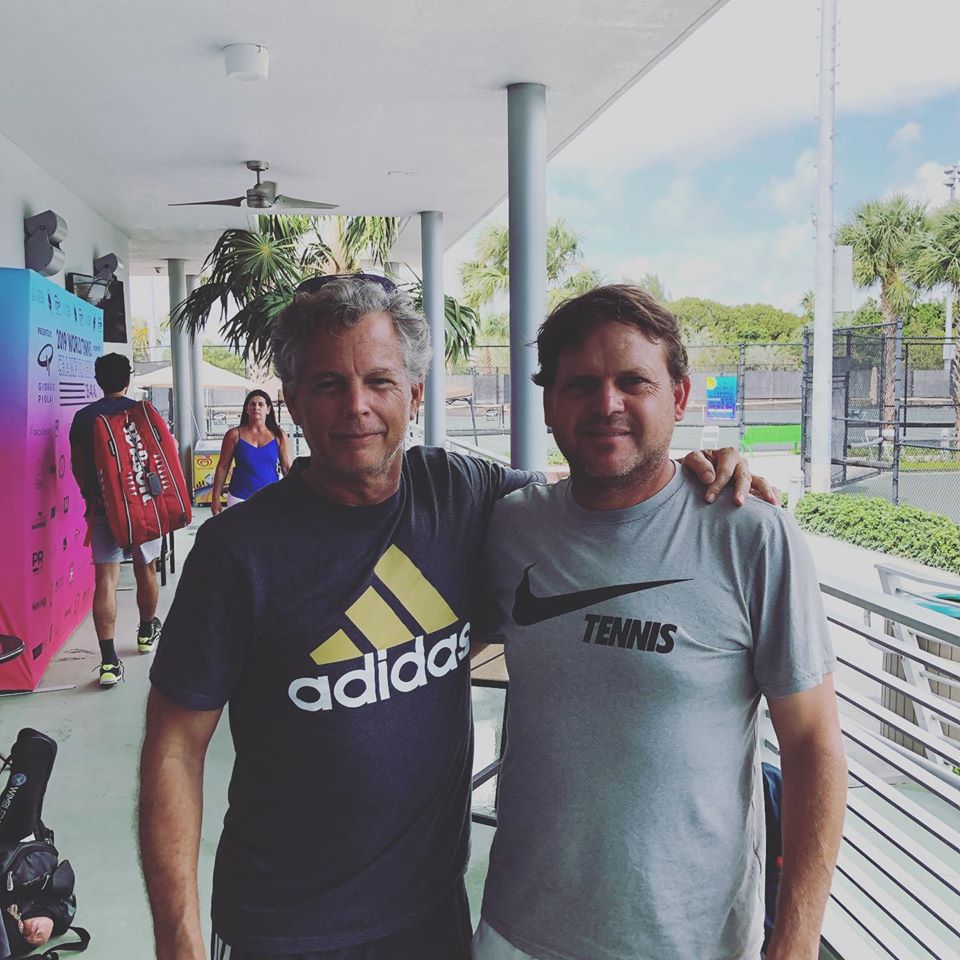 Thomas Anderson and Ricardo Mena in 2019

USP: What did you do once you graduated? Tell us a bit about your life to this point.

RM: After graduating, I worked in publicity and design for several years until I open my own company. I started then working in my business in the morning and the afternoons to teach tennis, something that remained my true passion. Four years ago, I moved back to Paraguay after 20 years and I kept the same life, mornings in my business and afternoon running my own tennis academy.

USP: We had you back at USP, this time as a coach, this past December to participate in the 15th USP Winter Showcase, a recruiting event that brings over 180 players from all over the world to be recruited by over 120 college coaches. What did you think of the 2019 USP?

RM: At this point, USP has become the standard in the college recruiting industry. To see hundreds of student-athletes, all with the same goal in an event, it was mindblowing. I couldn’t predict this was going to happen in 1994, but knowing Thomas Anderson and his philosophy with USP, I am not surprised to see them being successful and run this type of event that impacts so many lives.